OVER 100 years
of Innovation!

The Florida Engineering Society has a deep heritage with roots dating back to the year 1916. Today, the Florida Engineering Society is a 4000 plus member organization representing the interests and visions of Professional Engineers throughout Florida. As an affiliate of the National Society of Professional Engineers, the Society is organized into six practice sections representing different areas of practice and twenty chapters which geographically blanket the State of Florida. Each of the chapters and practice sections are represented on the Florida Engineering Society Board of Directors. The Society has a number of committees which organize into divisions under the direction of the vice presidents. For more information, please visit www.fleng.org.

The question of unity
was uppermost in the

minds of the leaders
of both societies. 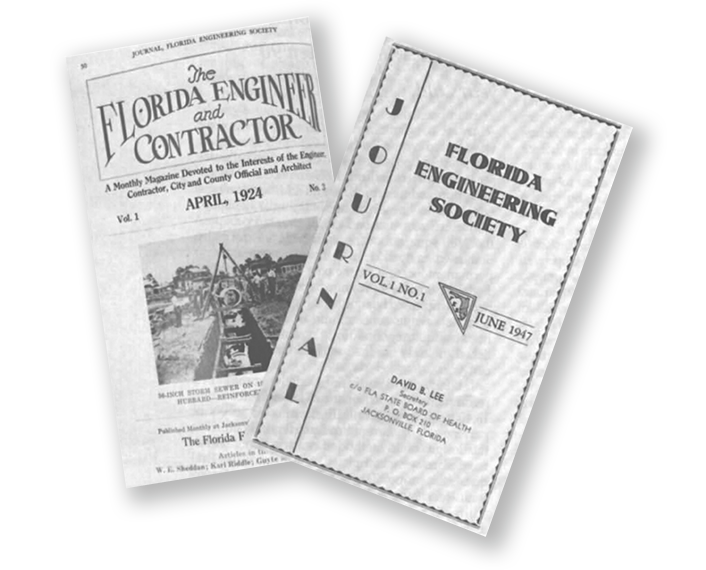 A 75th anniversary for whatever reason is a watershed milestone. It is a time to pause, to reflect on the past, to ponder the present, and to consider the future.

John F. Reynolds, PE served as chair of the Unity Committee and later as president of both FES and FSPE during 1954-1955.
FES Headquarters, a three-story, 19,300 square-foot building with two levels of parking was completed in 1992.
Albert O’Neall, PE, State Headquarters Building and Grounds Committee Chairman; Roland Lee, PE, Headquarters Building Finance Committee Chairman; 1969-1970 FES President Roy H. Barto, PE; and Executive Director Gene Lent check out progress on headquarters construction in 1969.
Clarence S. Hammatt, PE, he was instrumental in the founding of FES in 1916 and in 1921 served as the organization’s fifth president. He even designed the FES logo in 1918.
Inaugural class of the Florida Engineering Leadership Institute shown above in 2004.
Patricia J. Bishop, PhD, PE, FES and NSPE Young Engineer of the I Year, 1984.
Leon Brooks “Skeet” Thrasher, PE, (shown right) worked as a city engineer in Lakeland in 1918, and was the last living FES Charter Member.